Today was a day of challenges.  Perhaps the biggest challenge on a day like this one that occurs at the beginning of any new adventure and that is the challenge of the unknown. Mike and I have both read the books and watched the videos. We’ve completed practice walks with backpacks and trekking poles. A personal trainer was enlisted to show us how to rehabilitate 70-year-old muscles at the end of an arduous day.  But none of that – I repeat NONE of that – prepares you for the sight of St. Bees Head when viewed from the beach where the walk begins. It is a mountain whose left half has somehow disappeared into the sea. And that climb – perhaps 300 vertical feet of it over a short, steep course – was just the introduction to a day filled with such surprises.

Similarly, nothing prepares you completely for the miles and miles of coastal walking on a trip that is billed as one which leaves one coast to take you to another. “Will we ever head East toward the North Sea?” Quite literally, more than three hours of a day that is billed as a seven-hour hike was spent on windswept cliffs along the sea coast. Later, when we finally did move inland, the 350 vertical meter ascent of Dent Hill has no equivalent near our flat sea coast homes in Rhode Island.  (To add injury to insult, the view from the top is a panoramic view of the not-so-distant Irish Sea [“DAMN when will we leave the sea??”]) And I seriously doubt that the mile-long, 60-degree descent from that hill through Ravens Crag has a suitable practice field outside of Tibet or Nepal.

But the heavens present diversions like the stunning views of mountain and sea as we ambled along. And there were meetings and reunions with fellow travelers. Haimish and Amanda from New Zealand were breakfast companions in St. Bees who emerged from the B&B in our destination of Ennerdale Bridge just as we arrived. Another breakfast meeting was with a loquacious 30-something woman from Sacramento California named Rebecca. Late in the day she overtook us on the trail just as we emerged from  the aforementioned  Ravens Crag and stayed with us for the three or so miles that remained into the village. Once there, we all (Mike, me, Hamish, Amanda and Rebecca) toasted our success with pints of Thatcher’s Cider.

Reflecting on the day over dinner, Mike and I agreed that the single dominant take-away is the sense of satisfaction and accomplishment that comes with choosing to do something that you know to be new and difficult and then finishing that something despite the many obstacles (physical, emotional and mental) that reared their heads to try to derail the effort. I would add to this that the power of relationships is a force to be reckoned with – even the casual and fleeting relationships that occur on a journey like this one. Walking the last few miles in conversation with the intelligent and energetic person that is Rebecca from Sacramento was a tonic for aching muscles and flagging willpower. In the same way, the reunion with Hamish and Amanda and the opportunity to celebrate our joint accomplishment together was somehow reassuring that this is a VERY do-able thing in part because it is a shared thing. 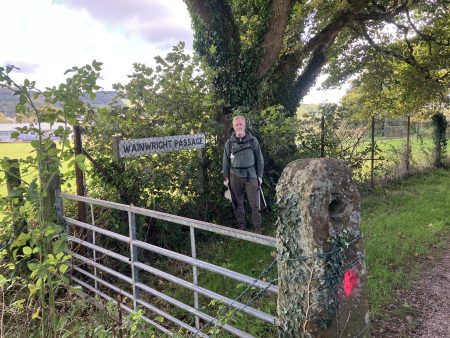 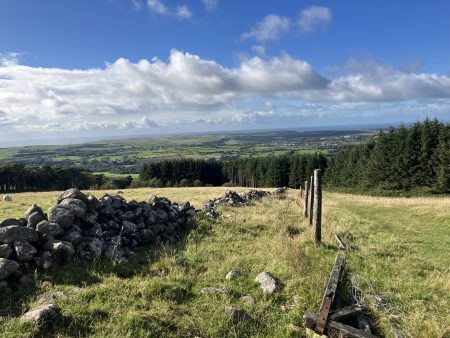 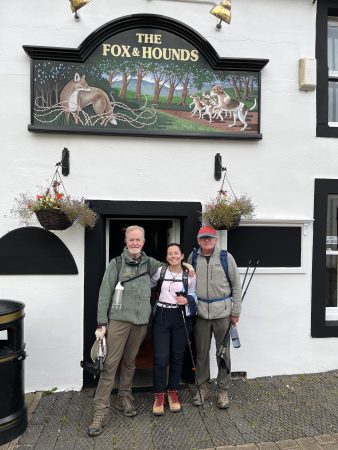