After yesterday’s outing, Mike and I were tempted to claim today as a restorative day off to nurse sore shoulders (well – one sore shoulder that would be Dennis’) and overall fatigue.  But this morning presented a different idea. We would walk today and take tomorrow as our rest day. After all, today’s course was a mere 9 1/2 miles with a single climb at the beginning. The day’s weather forecast called for  some rain in the early afternoon but clearing by 3.  The worst weather was targeting the north, i.e. Scotland.  So after breakfast, at about 9:20, with rain gear deployed and Dennis’ new trekking poles in hand, we set out for Grisdale Tarn and then the long, placid and scenic descent into Patterdale. The guide book  promised a stroll along “beautiful valleys and the lake of Ullswater glistening in the distance.” A lovely soft rain began almost immediately after our departure and we began our climb over groomed bridleways toward our destination. I experienced this part of the journey as being like walks in the soft rains of an Irish morning – something I have done in the not-too-distant past.

About two thirds of the way to the crest of the valley the rain began to intensify and the wind picked up a notch. But it came from behind so all was good. As we neared the high point of the walk, mother nature had a different delivery in mind. The rain began to fall in wind-driven sheets.  The horizontal direction of the raindrops made it difficult to imagine that they would ever make landfall.  But make landfall they did and the path began to resemble a rivulet.  But it wasn’t anything that our water proof boots could not handle and thankfully the wind was still behind us.

But as we emerged at the very top of Grisdale, we were suddenly and mercilessly deposited into a hurricane. This is not a descriptor that two lads who grew up on the Rhode Island coast would toss around casually. WE WERE IN A HURRICANE!! The wind easily blew 75 mph and the rain came down in an impressive and unrelenting pace. And it stayed that way for the next three hours. The bucolic sight of the mountain lake called Grisdale Tarn was never seen until we were about 100 feet from the water’s edge and then all we could make out was white caps atop two-foot high waves.  The beautiful valleys were never seen. The long vista forward to Ullswater was never seen. Dennis was literally blown off his feet at one point.  Mike lost a hiking pole to a roaring cascade of a waterfall that had to be crossed because that’s where the path went. (We’re certain that this 15 foot wide, one foot deep rush of water normally presents as a trickle. But not today.) So, with water in all four boots and one pole short, we proceeded into the valley below. Only when the base of the valley and flat terrain became visible below did the weather begin to slacken.  The wind abated but the rain continued to fall as in a summer thunder storm at home.

Suddenly, as we arrived at a gate that introduced us to the parklands that surround Patterdale and Glenridding, as if a spell had been cast, the weather stopped. Went away. Ceased. The sun appeared to brighten the mountain ledges we had been unable to see all day and Ullswater glistened in the distance.  Once in the village, we found our way to the lovely and quiet Green Bank Farm where I sit now after sharing a bottle of wine and a lovely homemade shepherds pie dinner with Mike in front of a roaringly hot wood stove. We are dry.  Our stuff is wet but being dried as I speak by the lovely and accommodating host Beverly.

Tomorrow we shall make our way over to meander around the market town of Penrith before making our way to Shap and the next excellent adventure.

Lesson one: When circumstances present you with a single choice, take it. When you are in the remotest of places in horrid conditions, there’s only one way to go – down – now matter what obstacles impede your progress. Deal with it!

Lesson two:  If sent into unforgiving circumstances where death is a real possibility, be with a trusted companion – a brother if at all possible. 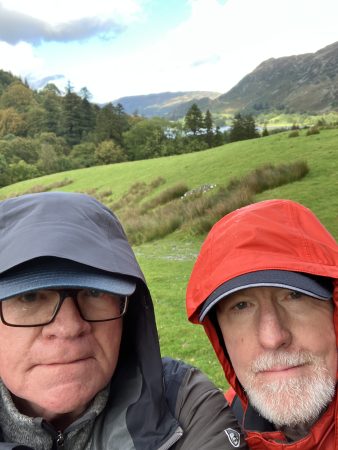 I don’t know.  Do we look like we just narrowly escaped death?