This was a day of epic adventures by any standard! It started in a routine way when we sat down next to Haimish and Amanda for a full Cumbrian breakfast at the B&B. We departed at 8 :45 for what was billed as a 15 mile walk – the longest in the Lake District – with a single but rather short hard climb just after the halfway point. The ascent began as expected just beyond the youth hostel hut where we had stopped for tea and a snack. As predicted in the guide book, the path was nearly vertical and ran parallel to Loft Beck (that’s Loft Stream to you non-English speakers). But somewhere along the path we missed a turn. When we got to the top of a path that was MUCH longer than the book had described, we pulled out said book and also fired up the GPS maps to discover that we were at least a mile from the path we belonged on! (This was not the exclusive blunder of two geriatric hikers.  Rebecca from Davis [not Sacramento as mentioned yesterday] had rejoined our troupe at the base of this climb.)

To return to the prescribed trail that would take us down to Rosthwaite, we had to correct our course to climb up and over yet another peak, extending our trek by as much as two hours and increasing our fatigue five-fold. But we succeeded and arrived at the way point that is the Honister Slate Mine.  This is the place where many hikers stop for a rest and a cup of tea in mid-afternoon. We arrived at dinner hour with the daylight fading and the rain beginning. By the time we arrived at the first village along the way to our destination, a sleepy and charming place called Seatoller, we were in a steady rain in pitch dark. After imposing on the local guest house to use a phone to inform our hotels that we were not dead, just late, the three of us started out for the final mile in a steady rain to Rosthwaite with headlamps affixed.

A collective executive decision was taken about one quarter mile along to digress from our path into a brightly-lit hotel Glaramara – an oasis in the gloom. There, the delightful young Hungarian woman who was the night manager called a cab to collect us to complete the day’s journey. Because the cab would not arrive for 30 minutes, our host suggested that we relax in the hotel’s beautifully appointed bar where we all downed a quantity of cider and chatted amongst ourselves and with the manager, later joined by the owner. A most pleasant and welcome interlude.  The cab arrived as advertised. The driver made confident and speedy progress through what was now a driving rain to deliver Rebecca to her hotel and then Mike and I to ours. It was after 8:00PM and the kitchen had stopped serving. Mike and I were pondering whether to venture out to get a meal when Hamish emerged from the bar (he heard our voices) and happily embraced the two of us saying how worried they were when we had not appeared earlier as we all had expected we would. We quickly agreed that dinner was not necessary at this hour and under these circumstances, so we repaired to the bar and sat to enjoy the company of Hamish and Amanda and to down another pint of cider.  All was well!!!!! Safe and sound and none the worse for the wear.

Lesson learned: when in the wild, check your progress with a map or compass as soon as you suspect that something is amiss – or just check them as you go.

Second lesson learned: any day that has a happy AND healthy end to it is a damned good day!

Third lesson learned: after this 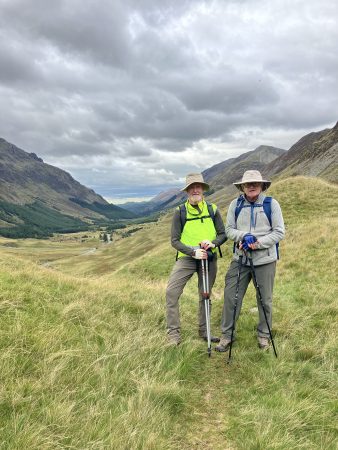 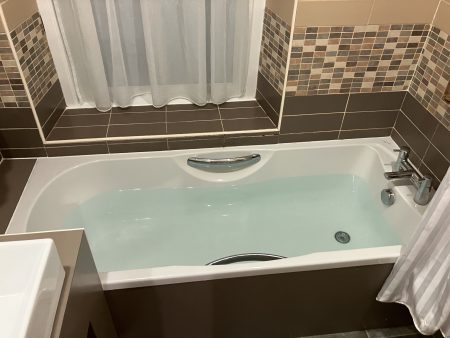